That’s the First Editions rack in the library in my den downstairs. Oops, shouldn’ta disclosed the location. There are folks who could kill for my collection.

And that’s Thor on the top shelf, guarding them hard covers with his rapid-fire proton zapper.

What? Of course that’s Thor. He has discarded his crummy hammer, that’s all.

Collecting First Editions is a hobby that is enriching in more ways than one. First, financially – I swear all those books are going to be worth a pila cash if I let them hibernate a while and sell ‘em in maybe 2050. That’s supposing the world is still around by then. Second, they are classics and i love reading.

I have a JK Rowling that can easily go for a grand, even by 2020, maybe 2025. I got her in pristine condition at Nova, the second hand book store by the river, for 25¢. Touching it is like running my fingers over Rowling herself. Selling it for a grand will be a 4000-fold return on investment if you know yore math. I got a Herman Wouk, some John Grishams, an RK Narayan, a Walter Isaacson, a John Irving. Even a Sidney Sheldon, signed by Sid himself. All in mint condition.

I am looking for a Paul Gallico or maybe a Faulkner or a Wodehouse – early 20th century first printings. If anyone can meet me up with the owner of a hard cover ‘To kill a Mockingbird’ or ‘Screw it, Jeeves’, I’ll be eternally grateful. Take it easy, there’s no ‘Screw it, Jeeves’. I made it up ta make you laf.

First editions are worthless if you don’t keep ‘em in good condition. To protect my stash, I have a climate controlled basement. Temp 10°C, humidity 35% and Edvard Grieg. Yes, books love music, I swear they do. I reckoned first editions would go for classical stuff. Thor being highly partisan, I have ta play Grieg’s Peer Gynt in a continuous loop for him. The piece is based upon the folk legend of a 19th Century Norwegian kid named Peer Gynt and his pining for his homeland as he sails from his homestead near the Norwegian fjords, down to the North African desert and it captivates Thor. I have even seen him tear up listening to it, some days.

And I don’t collect paperback first editions. They aren’t majestic like hard covers. Besides, Thor doesn’t like paperbacks. “Ingen paperback”, says he, in a Nordic warlord-like grunt. Yes, Thor can talk, even if only in old Norse. At least he doesn’t have gas, like most other Germanic peoples.

Listen, everything in the previous two paragraphs was a lie actually. I just have First Editions on a book rack, that’s it. Thor is just a LEGO jedi my son built when he was seven.

If you are interested to start collecting First Editions as a hobby, the first thing you got ta acquaint yourself with is the definition of ‘First Edition’ – it is a first printing of a title by a specific publisher. However, a popular title (a Rowling or a Grisham) may have multiple publishers – all of whom will naturally have their own first editions.

If you are a collector like me, you’ll go for the true first edition – ie: the very first printing of a title, the one that precedes all other first editions chronologically. So, open the copyright page and it will tell you the printing history. Assuming you have an average level of intellect (which you must have, since you’re reading my blog), you’ll be able ta decipher the gobbledegook on the page.

So, a recap – just because you got a book brand new at your local Indigo outlet, it doesn’t necessarily mean it is a First Edition. You will have ta learn to recognize a First Edition and here’s how….

First of all, if you’re lucky the copyright page will mention the words ‘First edition’, like the Naomi Klein hard cover on her seminal work on ‘Disaster Capitalism’, see below… 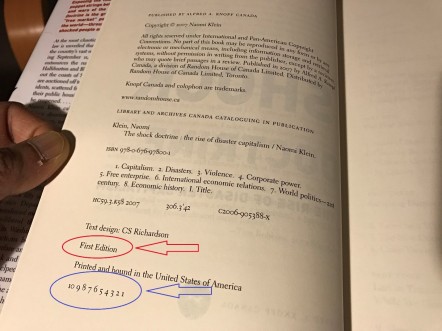 If you see ‘First printing’, instead of ‘First edition”, it’s the same thing.

Sometimes, you won’t find any of these terms on the copyright page. No problem. Look for the ‘number line’. It is a series of numbers that usually appear at the bottom of the page. If the line begins or ends with a ‘1’, it’s a first edition.

Other times the number line is preceded by the term ‘First edition’, but be careful because some publishers leave on the words ‘first edition’ even when the book is in its third printing and that fact is reflected in the ‘3’ in this number line….

What do you do if neither the ‘First edition’ nor the number line appears on the copyright page? Relax, read on….

In many cases, you may not see either the number line, or the ‘First edition’ mentioned on the copyright page. Not a problem. Just check if the copyright date and the printing date match up, like it does above, in the copyright page for astronaut, Scott Kelly’s ‘Endurance’, about his 340-day saga aboard the International Space Station.

I am careful how I handle my first editions. They have got to be looked after, since their value is directly dependent on their condition, unless you happen to have an ancient original.

Of course, certain first editions can’t be found in mint condition. In those cases, their archaeological value trumps everything. Like the 2700-year old Dead Sea Scrolls that the ancient Jewish sect – Essenes – produced and secreted for posterity inside earthenware jars in caves around the Dead Sea. Since they didn’t have xerox back then, they must be first editions.

The most valuable part of a first edition hard cover is it’s dust jacket. A dust jacket is 90% of the value of a first edition. So, don’t be a shmuck and fuck it up, like dropping coffee on it or jotting down your grocery list or something. Make sure there are no stickers or handwritten markings on it either.

In case you think it’s crazy to collect books, even first editions, remember vinyl records? They are back with a bang. I was such a schmuck to throw away my LPs and the Garrard record changer. We humans are nuts – we don’t care about stuff when we buy them new, but we go ape shit for them when they are vintage.

I could kill myself for chucking out my illustrated hard cover of Vatsyayana’s Kama Sutra after it’s pages got sorta kinda crinkly and brittle with all the dried DNA I had inadvertently splashed on it. Imagine how priceless that Kama Sutra could have been by maybe 2850AD. Forensic archaeologists would be creaming over the ancient life form they detected on it.

And no one, but no one has ever creamed over me.

2 thoughts on “My First Editions”