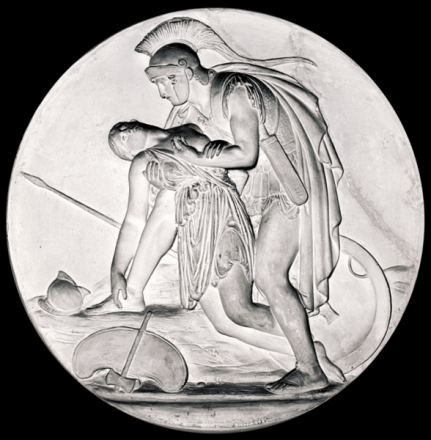 Achilles slays Penthesilea, the Queen of the Amazons and regrets it immediately (Plaster by Bertel Thorvaldsen, 1837)

At the fag end of the Trojan War the desperate Trojans, facing defeat, recruited a mercenary army of Amazons – ravishingly beautiful and at the same time brawny muscular big-breasted women, trained in hand-to-hand combat.

The 4th Century BC compiler of Greek mythology, Palaephatus, thought that the Amazons were actually men mistaken for women by their enemies because they wore clothing which reached their feet, shaved their beards and tied up their hair in headbands.

Of course, you and I know that the Amazons were broads. Legend has it that they made love to a man only once, because he died right after, his richard squashed under crushing vaginal muscle control which must have been like the pressures that the “Trieste” felt at the Challenger Deep. If you were an Amazonian man in those days, you had a hard choice to make – you either had a satisfying orgasm that was immediately followed by your penis being squeezed into a neutron star-like singularity or you chose to skip sex with a Gandhi-like ethos and a game of tennis and remained alive.

There’s no archaeological evidence of any neutron stars being formed out of crushed penises of course. I like to bring sex into everything and this is my blog and I’ll bring in sex whenever I wish.

When the Trojans decided to call in the Amazons in their war against the Greeks, it was a matter of time before Penthesilea – the Queen of the Amazons was facing off against the Greeks’ silver bullet hero, Achilles. If Penthesilea had had the right intelligence briefing, she’d have known that Achilles had been given the boon of invincibility by Zeus and he could never get whacked. Unless. Unless they knew about his heel, which unfortunately no one had told Penthesilea unfortunately didn’t.

Long story short, Achilles slew her. Oh yeah, in ancient Greece you didn’t kill anyone, you slew them. When Achilles removed the helmet and chest plate from the corpse and saw what was underneath (especially under the chest plate) he immediately regretted killing her. I wonder what he muttered under his breath. Maybe – “My oh my, what a waste of a gorgeous….pu…baby cat…”

According to Homer, Achilles was bowled over by Penthesilea’s beauty and fell head over heels in love with her – her corpse, that is. He begged his mother, Zeus’s favorite sea nymph Thetis, to bring Penthesilea back to life with those magical powers that Zeus had bestowed on her in exchange for being shtupped morning noon and night, but Thetis made excuses and begged off. Knowing Zeus’s roving eyes, she didn’t want competition.

(In case you come across a differing version of the story of Penthesilea and Achilles, ignore it. This is the official one).

Whatever the truth about the Amazons, there have been exceedingly strong women through the ages who have kicked ass. There have been many, some good and some scheming, but they all had some things in common – they knew exactly what men wanted. The Roman Empress, Aggripina the Younger, who would stop at nothing in order to see her son, Nero, crowned emperor and that included poisoning her own hubby, the incumbent Emperor Claudius. In overwhelmingly patriarchal India, the Rani (Queen) Lakshmibai of princely Indian state of Jhansi, led her fighters against the British during the 1857 rebellion. They say, she knew each of the thousands of soldiers she commanded personally by name and made them feel special. 400 years prior, Jeanne d’Arc did exactly that. She infused tremendous morale into a rag tag French army and kicked English badunkadonk till they couldn’t take it anymore and burnt her at the stake.

History has shown that women are far more capable of tremendous resilience under crushing adversity than men. Research by the Harvard Business Review has concluded that women are perceived by their managers — particularly their male managers — to be more effective than men in virtually every functional area of work. They are more adept at multi-tasking and constantly exhibit initiative, nerve and resilience. They are eager to professionally develop themselves and are more firmly focused on results, while displaying high integrity and honesty. The HBR study found women to be more effective in 84% of the competencies that employers treasure the most in their managers.

If one goes by the number of years – perhaps ever since walls came up in 11000BC around the first human settlement on the northern coast of the Dead Sea at a tiny hamlet that would later be known as Jericho – yes, ever since then, gender inequality has been the longest running human rights issue ever.

In 1960s, the American cigarette maker, Phillip Morris, launched a cigarette with a single target market – women. Unlike regular cigarettes, the new product – Virginia Slims – were slender and longer, making them look and feel feminine and elegant.

In those days cigarette ads were legal and so the launch was accompanied by a prize-winning ad campaign that had the tagline – “You’ve a come a long way, baby”. The copy was cheeky, aimed to portray the modern woman as being emancipated and no less than men.

Here is a collection of those ads. Take a minute to read the funny captions on the photos, they are hilarious. The one that has no accompanying snippet is the one that speaks the loudest – it portrays a stylish black woman in a freaky Afro top and bell bottoms, looking like she doesn’t give a damn. It is the only one that does not have any accompanying caption. The presence of a black woman in a 1968 ad is the point. 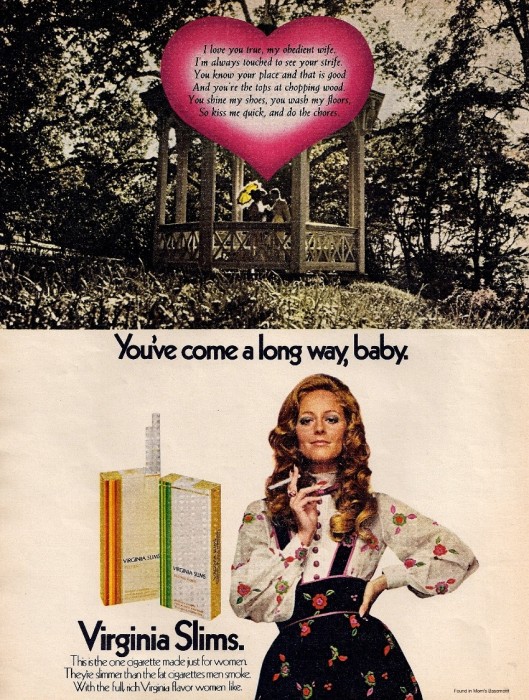 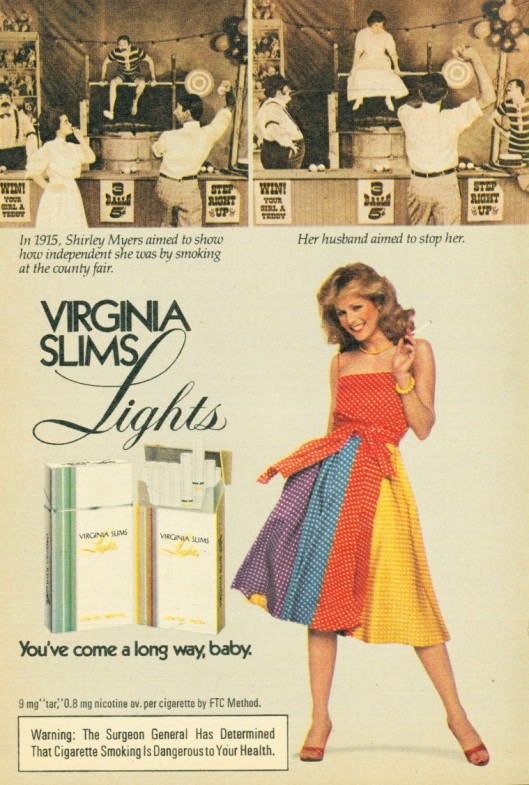 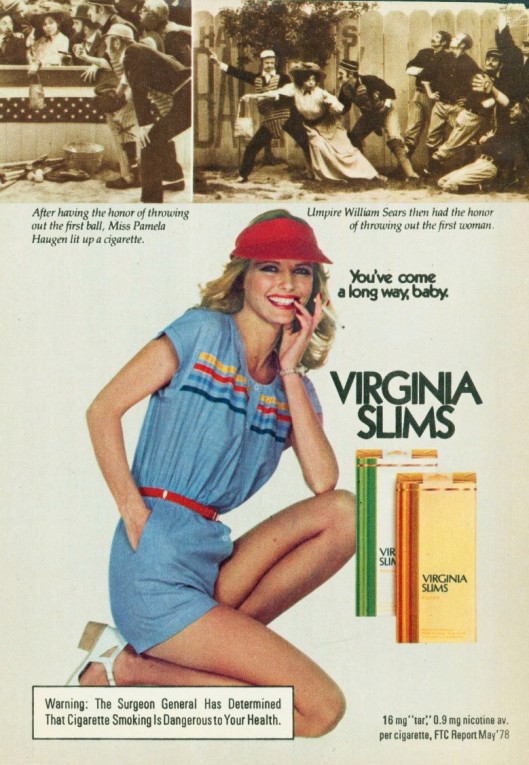 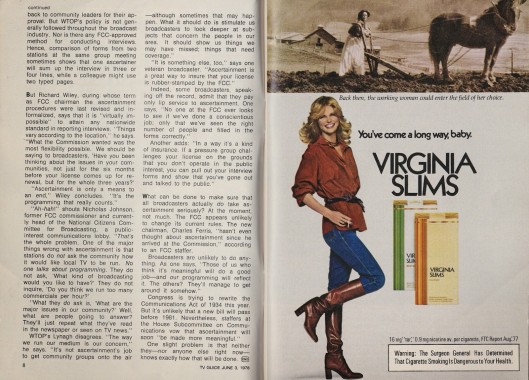 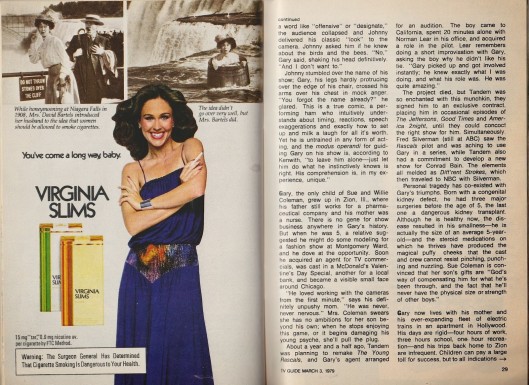 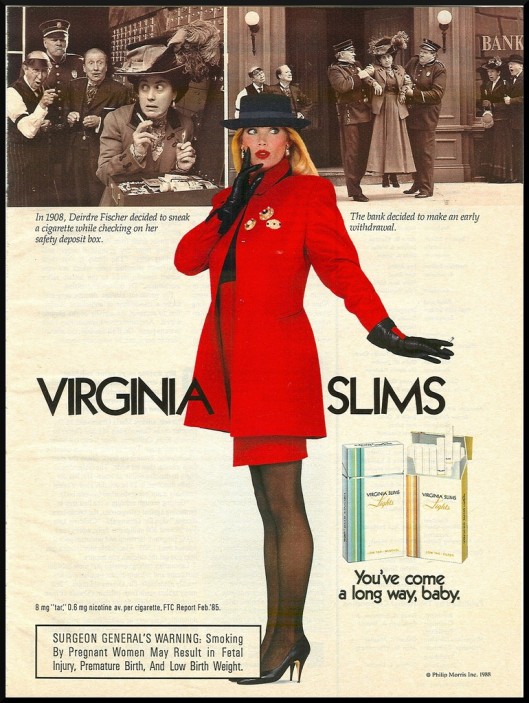 In the real world, gender equality remains a distant mirage even today. The percentage of women in senior leadership roles in business is still very low. In spite of the fact that women make better leaders, only around 5% of Fortune 500 CEOs are women.

Maybe I should have named this post “You still have a long way, Baby”